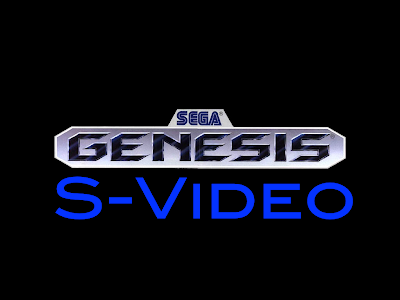 Hi everybody, happy new year! I'm back with a whole new stack of crusty old games to review, but first, I'd kick off 2013 with another howto. There are already a number of excellent step-by-step guides on how to mod the Genesis floating around the Internet, including the the one I followed, so mine will contain primarily general information and random musing about my own experience.

Use the info in this guide at your own risk. Like the NES, there are no dangerous voltages inside the Genesis, but it's vulnerable to static electricity once opened. You will be soldering wires directly to components inside the Genesis too, so take care not to cause a short circuit by bridging connections. Also, you need to know how to solder stuff. Probably should have mentioned that right away.


So what's so great about s-video?

I'm no video engineer, so I apologize if I make anyone's head explode with my layman's understanding of television signaling. Basically, an analog composite color TV signal contains two synchronized components: luminance (Y) & chrominance (C). Luminance tells the TV how bright to make the dot on the screen at a given moment, and chrominance tells the TV what color to make it. The two signals are multiplexed and either sent directly to the TV set, as in composite video, or modulated into radio frequency and broadcast, as in a television station. The TV set itself is responsible for demultiplexing chrominance & luminance, and converting the two signals into a video image. Unfortunately, the two signals tend to interfere with each other, resulting in video problems, like dot crawl, color bleeding, and so on. In short, composite video kinda sucks.

S-video is an attempt to deal with this suckage by keeping luminance and chominance electrically separate. S-video passes Y & C from the source device to the TV set on their own wires, avoiding most of the image problems inherent to composite video. Of course, to take advantage of this, you need a TV with an s-video input. They're pretty distinctive, usually consisting of a round plug with four pins; one for Y, one for C and two grounds. They're commonly found in higher-end TVs made in the last couple of decades, though they're becoming increasingly rare as all-digital connections, like HDMI, have come to dominate.

S-video has been supported by video game consoles and old computers since the Commodore 64. The video encoder chip in the Sega Genesis supports it too, though Sega saw fit not to properly wire it up. No matter, we can lift the signals directly from the chip.


What do we need?


To start, you need a model 1 Sega Genesis. The model 1 genesis is the best unit to own for a number of reasons, but for our purposes, the mode 1 is ideal due to its video encoder chip being larger than the model 2's and through-mounted instead of surface-mounted. Be warned, though: a few later revisions of model 1 Genesis units actually contain the guts of model 2 units. To be safe, look for Genesis consoles with "High definition graphics" printed along the top and/or a 9-pin serial connector just left of the 'ch3-ch4' switch, or a noticeable, 3/4" gap where that connector should be. For folks in Europe & Japan, an early-model Mega Drive should also work with this mod, though I can't guarantee it.


In addition to a model 1 Genesis, you will need most of these components to build the Y & C amplifiers. You don't need the LED, phono plugs or oscillator unless you would like to follow the author's complete instructions to overclock the Genesis' CPU and add A/V jacks to it. The project wires, transistors, capacitors, and project boards were readily available at my local Radio Shack, but I couldn't find 110k ohm resistors in stock, so I had to make due with 100k ohm pieces. A female s-video jack was the hardest part to locate, as Radio Shack no longer stocks them. Mine came from a breakout cable used to connect a PC video card to a television, but you can pick one up here for just a couple of bucks. 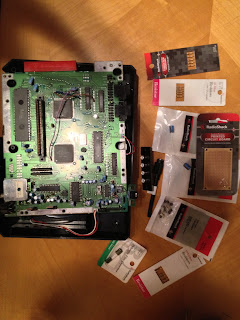 This part is pretty easy. Basically, remove nearly every damn screw that's in the console. Six screws on the underside hold it shut, while a whole bunch more hold the main board to the bottom of the case. Once the case is open, be sure to ground yourself before touching any internal components to prevent static electricity damage to the Genesis. Remove & discard the thin steel RF shield covering the top of the mainboard; it only gets in the way once the mod is complete. There's a thick steel heat sink attached to two power regulators on the left side of the console. Remove the two screws & set the heat sink aside for now. The video encoder chip that we'll be noodling with is located underneath the heat sink. The power LED is permanently attached to the top of the case as well as the mainboard. If you need to completely liberate the mainboard from the case, cut the LED's wires, and splice them back together when you're ready to reassemble.

The video encoder chip inside the Genesis, a Sony CXA1145, does indeed generate s-video signals, but not at a power level sufficient to directly drive a television set. We need to build a couple of simple one-transistor amplifier circuits to boost the 1145's s-video signals to a level high enough to drive the TV. David Howland's website provides excellent step-by-step instructions on how to turn a pile of parts into two functional amps, and I can't add much more. If you're having trouble following the circuit diagram, just do what I did: make your circuit board look as close as possible to the one in the image. The amp input lines shown on the circuit diagram aren't actually pictured and can be challenging to locate, so I've highlighted them in the following photos. 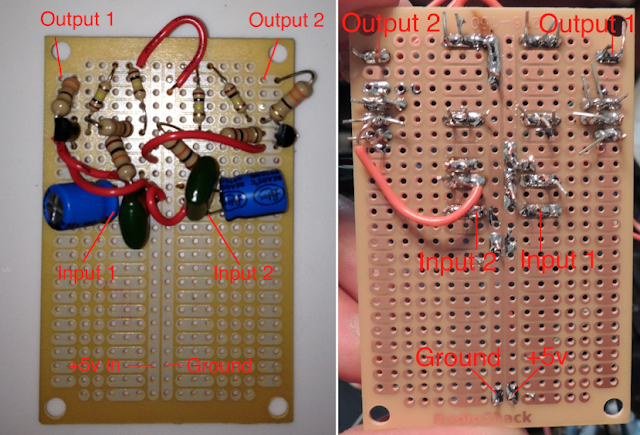 Connecting the whole mess up


Locate the video processor chip. It's on the rear left corner of the mainboard, near the recently-removed heat sink. It's labeled 'CXA1145P' and has 24 pins, of which pin 1, 12, 13 & 24 should be identified by silk-screened labels on the mainboard. We're interested in pins 15 & 16; pin 15 is chrominance, and 16 is luminance. I connected the left amp, the one with a green input & output wire,  to pin 15 and the right to 16. It doesn't matter which amp is connected where as long as you keep track of how you connected them. 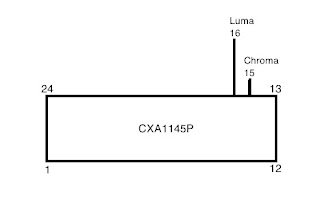 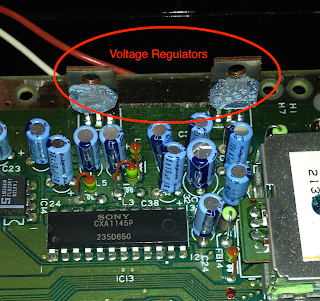 Next, you need to connect +5v power to the amps. You can lift that from pin 2 of one of the two voltage regulators. Pin 2 is closest to the front of the Genesis, though Sega has conveniently labeled all three pins on both regulators. You can connect the ground wire just about anywhere, like the RF shielding, but pin 3 on the voltage regulator is a good spot. I've found it's best to solder all connections, including ground, to guarantee a solid, noise-free signal. This would also be a good time, while the voltage regulators are exposed, to replace the blue thermal grease that couples them to the heat sink. After 20+ years, the grease tends to harden & lose its ability to conduct heat. 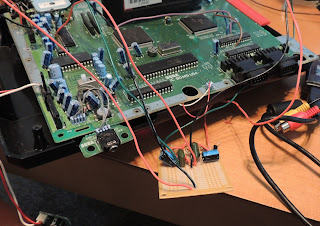 Now that the amps are wired, it's time to bench-test them. I used a USB TV tuner attached to a laptop as a test bed for convenience sake, but any TV or capture device with s-video inputs should work. If you get no picture at all, recheck pretty much everything. If you get a black & white picture, then luminance is working but chrominance isn't. If you get a picture with lots of vertical & horizontal hold problems, try reversing your Y & C signals. If the picture is visible but noisy or jittery, recheck the solder joints between the Genesis & the amp board you built, particularly power & ground. Once you've verified everything is working and you're ready to mount your amp board, be sure to insulate the bottom with electrical tape to avoid shorting it against any of the Genesis' components. The amp board can be taped or hot-glued to the mainboard in front of the cartridge slot.

At last, connect the chrominance & luminance amps to the s-video jack according to the diagram. The two ground wires can be combined and connected to the amp board's ground or directly to a ground in the Genesis. If your Genesis has the completely-unused 9-pin serial connection, you can safely remove it to make room for your s-video connector if you want. Otherwise, I'd suggest mounting it in the space just left of the 'ch3-ch4' switch on the back of the console. Try to keep it mounted above the seam on the upper half of the case, in case you need to open the console up again.


Overall, I'm pretty impressed with the video quality of my Genesis s-video mod. The only significant video problem I've noticed is the presence of 'jail bars', black vertical stripes that appear between the Genesis' rather chunky pixels. I've read that dorking with the resistor values in the amp circuits can minimize this effect, but it's a problem endemic to the CXA1145 chip, and can't be completely eliminated. Otherwise, it looks a damn site better than RF, and is a noticeable improvement over composite. There's no more dot crawl or rainbowing of white text. Black images, such as the black space surrounding the 'Sega' logo on a game's boot really look black, not brown or a smeared mishmash of dim colors. The colors are far more saturated with s-video than composite, and they really pop off the screen. I've included a few screen shots that I hope illustrate the difference between s-video and composite video, when everything else is equal.

In NBA Jam, the player's names are clearly legible in s-video, but blur together in composite. However, in the s-video shot, the jail bar effect is clearly visible in the blue border and the green stats bars.

The images in Sonic 3 are much less blurry with s-video. Note the greater detail in in Sonic himself, as well as the grass around him.

Finally, have a look at the level select screen in Lightening Force. The red box around "Daser" shows significant dot crawl in composite video, but not in s-video. Composite video's "softer" look makes the planet in the background appear less jagged, but a lot of detail in its clouds and land masses is lost. Ironically, the Daser level in LF includes a sandstorm which partially obscures the player's view of the action. It looks much better in composite video than s-video because the checkerboard grid of pixels representing the sandstorm blur together, creating a translucent effect. This may well be an example of the developers using composite video's inherent limitations to their advantage.


So there you have it. With a little know-how and a raid on Radio Shack's parts bin, you too can enjoy the mighty Sega Genesis in vivid detail.

Thanks for reading my guide. Stay tuned for more classic game reviews!